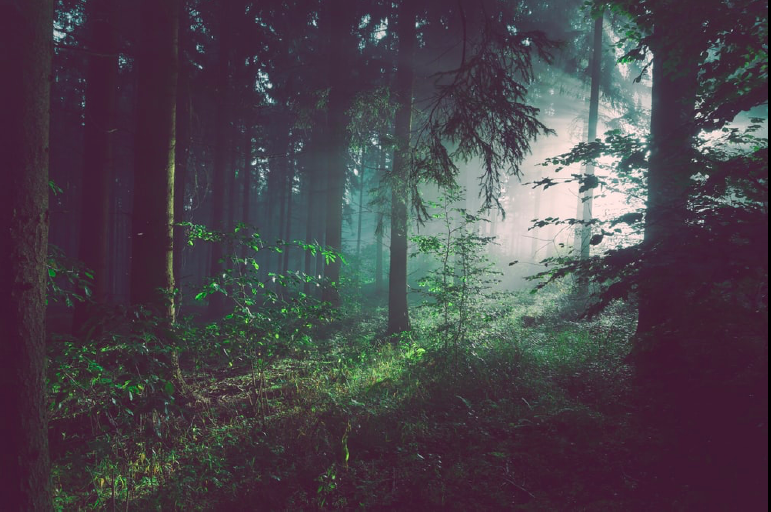 ‘Planting the Alder: When words are not enough‘ – Keynote Presentation Extract

Places of seeming safety can be unexpectedly cruel. Yet there is always the potential to heal, to be put back together, altered, different, more resilient than before…

Imagine a wood. Dense, ancient and for the most part, quiet. Ahead of you pathways loop, up and down, drifting across in snake like patterns, falling out of sight through the trees. The ground is uneven and scattered with catkins, leaves, bracken, sticks and twigs. The air is cool and clean. At times a wind shudders through, urging the trees to move and whisper, sending a signal to all life here that life out there goes on.

A boy is crouched down beside a conifer tree. He is picking at the soil with a stick, making indentations. Flecks of soil are flying in all directions. His movements are hurried and in contrast to the quiet, still wood. He kneels and pushes further into the soil making a small hole that grows with each dig. His fingernails are filthy and a sweat is building on his forehead. His eyes dart up and down, as if looking for someone that he cannot quite locate. Panic builds. He digs deeper. Soon he is able to step into the hole and dig around himself. He has cuts along his arms where his frantic movements have caught on creeping brambles and twig spikes. He is using his hands now to gouge out the soil, his fingernails broken and bleeding, his breath short, his eyes wild with fear and exhaustion. It seems that he is looking for something in the soil and that no matter how deep he goes, he cannot find what he is looking for. He is lost and he is hurting. He is very much alone.

The weather turns. A sharp, cold wind darts through the trees. Rain makes its way down along the branches hitting each leaf, drip drip at first, then quickly torrential, the heaviness of the drops pushing each leaf downwards, pouring water onto the forest floor below. The sound is deafening. The boy is soon drenched. He looks up to the tree canopy, squinting his eyes as the rain bares down. He is sodden and shivering. Realising the hopelessness of his situation, he tries to climb out of the hole he has created, but it is too deep. The sides are soft and slippery now, and each time he reaches up to get a foothold he falls back. He crouches low, folding his small arms around his broken body, allowing the elements to beat him.

Several hours pass. The rain has subsided and the quietness restored. The boy is sat motionless in his mud pit, struck with the shock of his predicament. He does not know what else he can do to help himself and is caught like a fly in a web, each move setting him back a little more. This helpless, stuck place where everything hurts prompts a silent tear to fall.

Up above the boy had not noticed that he was being carefully watched. With gentle curiosity a bear had caught scent of trouble and pain and made its way over to the source of it. Bear peered further into the hole, prompting the boy to look up. Their eyes met, different eyes belonging to different souls, connected. A moment passed. It was a moment that gave bear permission to help, and the boy the courage he needed to be helped.

A long thick branch was lowered using nose and paw. The boy found within him the strength to pull and climb, pull and climb. He did not know if bear could be trusted and as he reached the top, he hesitated. Bear sensed this and moved back to give the boy space, lowering its head slightly in a signal of peace and empathy. The boy took heart, grabbing the top of the branch with one hand and heaving his body up and out of the hole with the other. Out of breath he sat there. Bear and boy were feet apart, tuning in to each other’s existence. The boy longed for home and everyday thoughts began to filter back into his mind. Bear let out a sound to mark its departure. Rising carefully bear padded over to the boy, brushing warm fur against soft skin, and was gone.

The boy stood up. His whole body hurting, but he was strong enough to walk and walk he did. Each step a hurdle overcome, each breath a triumph. He did not know where to exit or what lay before him. He just kept on going, until, finally, a sun drenched clearing appeared and beyond it – life. A road. A cottage. A blackberry picker.

The boy looked back, to the wood he was about to leave behind. Where his screams could not be heard. Where his eyes were blinded by the rain. Where his voice was silenced. Where he met bear. If I ever return here, he thought, I will return here stronger.