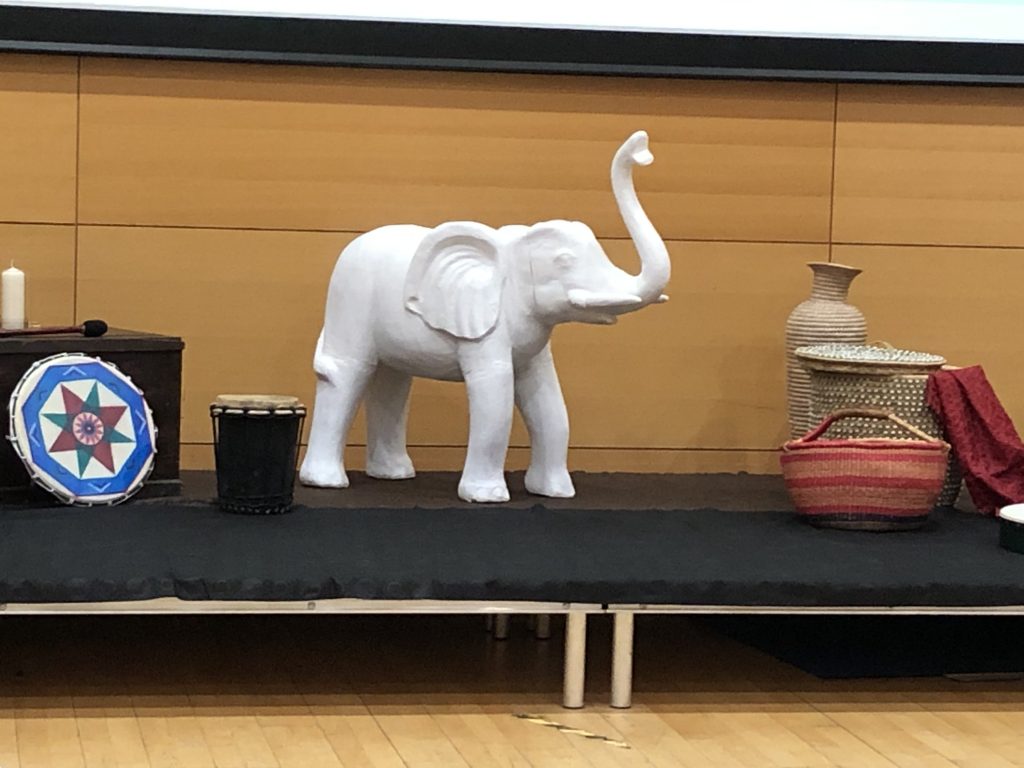 Here’s the story of the elephant in the room – a project I contributed to the British Association of Dramatherapist’s 2021 Conference, ‘Carnival of Canboulay: Masquerades and Dialogues about ‘Race & Power’ at play in Dramatherapy’, that intertwined at pivotal moments throughout the conference.

‘There’s an elephant who would like to join the carnival. The elephant has no name, she has encountered much over the years, surviving poachers, changes to her climate and being separated from her family and community. The elephant’s traumas are as long as her memory. She grieves her past whilst taking one step at a time as she makes the endless journey to visit the lands where she lost her loved ones and once called home. The elephant is a survivor and is searching for new lands. She wishes to be seen and wants to join this party. You may spot her on her journey, where she will continue travelling from room to room, changing throughout the carnival.’

There were several layers to what this white elephant at the conference symbolised. Not only was she a symbol for ‘the elephant in the room’ when exploring difficult and seemingly taboo aspects of power, privilege and racism, she was also a metaphor that represented what we, as a species, have done to others throughout history.

Being half-Asian, I have always had an attachment to elephants and find them majestic, powerful and magical creatures. I have always been surrounded by elephants, whether real, ornamental or indeed the elephants in the room that we as therapists often encounter.

The elephant started her journey long before the conference during her creation. She became a big part of my home for months, becoming a prominent feature that no one could miss… even my greyhound, Horatio, became attached to her.

Made out of cardboard, this elephant was initially brown (similar to my own complexion). It took painstaking time for me to assemble and paint her. No matter how many times she was painted, her original colour continued to shine through… she refused to be white… until heavy duty masonry paint was used*.

I found this seemingly inanimate object had character, and a connection to her resistance to being whitewashed was made as I was reminded of similar experiences I had with regards to my own skin colour. I became more reflective of my Asian ancestry and found my grandmother kept emerging. Although not intending to give this elephant a name, she soon became…

As she did in my home, Esme assumed a prominent position throughout the conference, where she was very much visible. Within the context of this conference, the symbol of the ‘white elephant in the room’ located centre stage was a visible symbol of the need to break the silence of racism and otherness. She was present throughout difficult discourse, as well as an offer of support for people to share hard and difficult stories.

Esme moved throughout the conference, making appearances during presentations and workshops. She joined white participants as they discussed and explored the concept of ‘White Fragility?’ and was an integral part of the performance and workshop, ’Welcome to the Masquerade!’. Each performer used the elephant to represent their relationship to racism. Participants were later invited during the workshop to come together and transform her, symbolising different races uniting. This was also a reflection of individuals exploring their own relationship with this metaphor, as well as what had been evoked for them during the conference. Esme was soon adorned with colour, as well as personal messages of hope and difficulty.

The elephant made her last appearance during the closing ceremony, once again centre stage, after she had been transformed. She was a representation of the individual journeys all participants had experienced over the course of the conference.

However, Esme’s journey was not yet complete. She was still in search for her new land…

After the conference, it felt only fitting for her to be transformed one last time. So that there was closure from the conference and personal messages were respected, Esme was painted to resemble the natural colour of an elephant. This last transformation was to enable Esme’s journey to continue, and this time, Horatio and I had no difficulties, as she appeared to be happy to be painted grey with ivory tusks.

Although delighted to have Esme back, particularly for Horatio, her journey for her new land was not complete. She has finally found her forever home at Roehampton University, who hosted the conference and trains dramatherapists.

Esme will help trainee dramatherapists to address the elephant in the room!

*A huge thank you to Mary Smail for providing the white heavy duty paint and helping to repaint Esme!